What is LATINNO?
The Background
The Database
The Process

LATINNO is the first comprehensive and systematic source of data on new institutions for citizen participation evolving in Latin America – the so-called democratic innovations.

LATINNO looks at the thousands of new institutional designs which have been created in the previous years with the aim not only to include citizens in the political process, but also – through citizen participation – to make governments more responsive and institutions more accountable, in addition to strengthening the rule of law, and promoting social equality and political inclusion.

LATINNO collects data on democratic innovations evolving in 18 Latin American countries from 1990 to 2020. The data is coded for 43 variables which reflect the context, institutional design, and impact of each innovation. Along with the quantitative data, qualitative information on each case has also been gathered and assessed. This prolifically rich content is now being analyzed in policy briefs, academic papers and op-ed pieces.

LATINNO is not just a dataset. It is a research project that produces new, comparative knowledge on democratic innovations, democracy, and citizen participation in Latin America.

The LATINNO Project is coordinated by Thamy Pogrebinschi, at the Department Democracy and Democratization of the WZB Berlin Social Science Center. It is funded by the Open Society Foundations.

LATINNO seeks to emphasize that democracy in Latin America encompasses more than elections and that new forms of participation go well beyond protests and demonstrations. It assumes that democratic innovations are new mediations between state and civil society, along with more traditional institutions like parliaments and political parties. LATINNO considers that the growing volume and scope of innovations are changing the political landscape in Latin America and transforming representative democracy from within.

It has been claimed that Latin America exists as a laboratory of political innovations and participatory governance. Governments, civil society organizations, and international agencies create new practices and institutions aimed at involving citizens in the democratic process. However, knowledge on participatory innovations has been mostly limited to case studies, which frequently focus on a limited number of initiatives at the local level (e.g. participatory budgeting). Before the LATINNO database, there was no systematic and comparative knowledge on democratic innovations across countries and institutional designs, since most information was widespread and difficult to gather.

LATINNO's aim is to fill this gap. Our data allows cross comparisons over more than 2,700 different institutional designs in 18 countries, and our research assesses their effectiveness and evaluates whether or not they contribute to and enhance the quality of democracy in Latin America. This is because, more than simply providing information on individual cases, LATINNO seeks to underscore the diversity of new institutional designs and experimentations with citizen participation in the region. In addition to identifying and mapping out new means of participation, LATINNO’s database makes data comparable across institutional designs and countries.

The LATINNO database is publicly available on this website through a user-friendly platform designed to reach beyond the academic community. Participatory innovations can be explored through filters and search mechanisms designed to make our coding understandable for each case while allowing multiple comparisons across cases and countries.

LATINNO adopts a broad definition of democratic innovation and comprises new institutions, processes and mechanisms that involve citizen participation as a means to pursue democratic ends [see Concepts Page]. Cases are coded for three sets of variables that capture their context, institutional design, and impact.

For LATINNO, each case stands for a particular experimentation with citizen participation with a specific institutional design, and not every single implementation of the same innovation. For instance, LATINNO does not count every single implementation of participatory budgeting (PB) as a case. In our database, there will be no more than three cases of PB per country: face-to-face PB, online PB, and multi-channel PB. However, based on the available information, we do register how many of each of these three institutional designs have existed or are active in each country, and in which cities they have been implemented. We apply this same coding logic for innovations with several implementations/occurrences within a single country: yet, whenever there is variation in the institutional design, we code it as a separate case.

Each case is registered according the following variables: 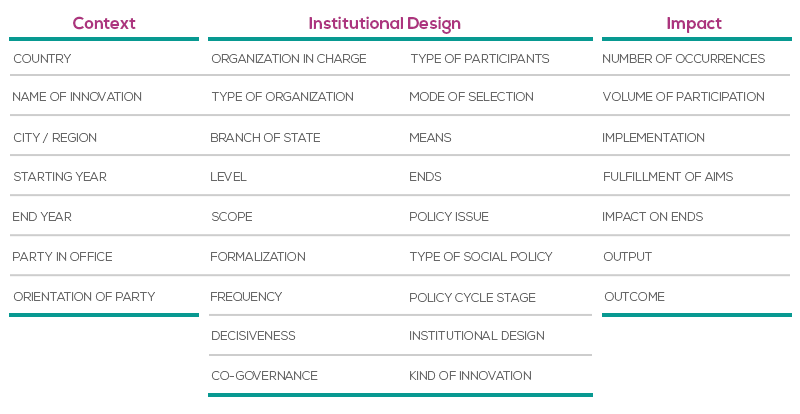 LATINNO’s database covers as many cases as our team has been able to find in each country until reaching a stage of data exhaustion. After a long experimental phase and a pilot project, we have developed and tested a rigorous procedure to identify, code and assess information on democratic innovations. Our sources include scholars, civil society organizations, governments, international organizations, existing databases, and the media. The secondary data are retrieved from academic work, research reports, impact assessments, constitutions, laws, administrative norms, policy documentation, governmental programs, and different media outlets.

The coding procedure and guidelines for interpretation are detailed in our​​​​​​​ Codebook, which has been drafted and adjusted several times based on the empirical evidence. Our coders receive continuous training and are regularly checked upon to ensure reliability. Complex cases, coding issues and conceptual questions are discussed collectively in regular team meetings and tackled during special task forces, database reviews and updates.

The Codebook and a methods paper explaining in detail our analytical framework and methodological procedure are available upon request.

LATINNO is now in its third and final phase.

The first phase (2015-2017) comprised a pilot project to develop and test the research design and prepare for data collection for all 18 countries. In this stage, we developed and refined our methodological tools to identify and assess cases, we conducted our first coding round, and in addition we began to share our preliminary results in papers, conferences, media outlets, our monthly newsletter, and social media. This phase concluded with the official launch of the LATINNO database and this website on June 27th, 2017 during an International Conference at the WZB in Berlin.

The second phase of the project (2017-2019) was planned to deepen the comparative axis of our research. We started to write comparative analyses based on the gathered data, and worked to strengthen our outreach strategy by holding presentations in many countries in Europe, the United States, and Latin America. We also focused on maintaining and completing the database with new cases from 2017 onwards.

The third and current phase (2019-2020) focusses on adding cases started in 2019 and 2020, the update of registered cases, and a final review of our database to encompass 30 years of participatory innovations in Latin America. This will be the subject of a series of academic and dissemination publications planned for 2020.

The LATINNO Project will conclude by the end of 2020. We will celebrate these achievements and our many years of work in a closing international conference [more information to be announced].

Make sure you're up to date with LATINNO's latest news by subscribing to our Newsletter and following us on Facebook and Twitter.

Send us a case