We are getting closer and closer to disclosing our data! This month, the programming of our online database was finished, as well as the design of our final webpage, i.e. the one you’ll be able to see as soon as the data collection is complete. It looks beautiful, and we are happy to announce that we will be able to make the data for the first country available online in early February, as soon as all case translations are ready!

We are almost there…..
We expected to reach 2000 cases this month, but after some necessary cleaning up of our database, we ended up not moving numbers forward as quickly as we wished, so we’re closing November with “only” 1955 cases from 18 countries. But we’re almost there, and still hope to finish the year with 2000 cases! 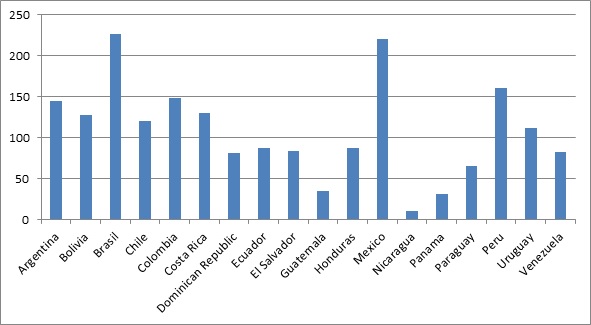 Case(s) of the Month

The use of online collective mapping tools is spreading rapidly throughout Latin America with the potential to generate solutions for common issues through citizen participation. OpenStreetMap is one such tool. This editable map is collaboratively developed through the contribution of individuals, civil society organizations, the private sector and the government.

In the LATINNO database, there are several democratic innovations that employ OpenStreetMap to direct input from citizens to influence decision making in public policies and solve collective issues of all sorts.

Mapatón por la Guajira, for instance, used information shared by contributors from all sectors to develop a platform to fight the effects of water shortage in the region of Guajira, Colombia. This information was then transformed into maps and geographic data on the most vulnerable areas of the region.

Mapatón CDMX, was developed to solve transportation issues in Mexico City. The Mexican platform had the goal of generating an open database on the routes of minibuses, buses and vans in Mexico City, to be later used by public administrators.

AsuMap, a government-led platform, is part of the revitalization project for the historic center of Asunción, Paraguay. Citizens are encouraged to register their suggestions, identify ongoing projects or events and interact with citizens on other proposals connected to the city’s development. Through such platforms, citizens have had the opportunity to impact their surroundings without having to leave their homes.

From November 25th to the 27th, 2016, OpenStreetMap promoted the second edition of the State of the Map Latam in São Paulo, Brazil. The annual conference is an open space to discuss new forms of using OpenStreetMap to enhance data usage to map and transform entire areas. Several news ideas were discussed during these days, and more democratic innovations based on them will probably take shape in the near future. As soon as they do, we will make sure they're included in our database!

In November 2016, civil society organizations which are part of the feminist movement #NiUnaMenos published the First National Index of Gender-Based Violence in Argentina. Its purpose is to produce empirical evidence in order to identify diverse forms of violence against women* and consequently impact and improve public policies aimed at eradicating gender-based violence. The Index also intends to encourage public programs to prevent risky situations for women* and to protect them under such circumstances.

The final product is the result of an online questionnaire, part of the national campaign “Argentina reports Gender-Based Violence”. The platform was self-administrated, the answers were anonymous and it aspired to cover all the different types of gender-based violence suffered by women* throughout their lives. The results were indeed alarming and showed that:

#NiUnaMenos is, undoubtedly, an exemplary experience of civil society participation that seeks to influence policy making in order to increase the wellbeing and inclusion of women*. The initiative is being reproduced in many other countries, not only in Latin America, but all around the world.

Just like democracy itself, at LATINNO we are constantly innovating. That’s why we are working on a Democratic Innovation Index which will help us to better understand the effectiveness, institutionalization, density and embeddedness of the cases in our database.

More information will be available in our December edition!